Spices to Warm Your Winter Meals 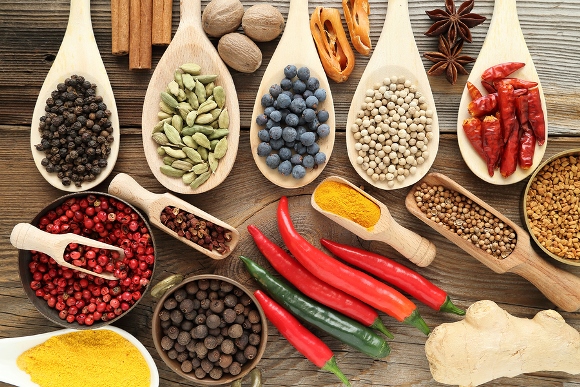 Using ingredients that are in season is sensible and an inexpensive way to cook. This goes for the spices too. Take advantage of those in-season spices and really make your winter cooking great. Here’s how to spice it up with winter spices.

When you think of winter spices you probably think of allspice, nutmeg, ginger, and cinnamon. But there is also cardamom, cloves, coriander, and star anise. These are all really great spices that add a lot to your cooking during the winter months. Not just your meals, but your desserts as well. Let’s talk about the uses for each of these spices.

This spice is the dried berry of the Jamaican pepper tree. It can be mistaken for peppercorn. The allspice berry is best when dried before it reaches its full maturity, because this is when it possesses the most flavor. Allspice is used in many Caribbean and Latino dishes and it’s great in savory and sweet dishes. It makes great tomato and barbeque sauces as well as great desserts such as applesauce, fruit compotes, and oatmeal cookies. It couples well with cloves and cinnamon for a delicious spice cake.

This spice is deliciously strong. It has a very strong, sweet taste, while also being quite pungent. It is great sprinkled over vegetables, especially squash and spinach. You can use it to spice both red and white meats, fish, desserts, and white sauces. It’s integral of course in your eggnog, but go ahead and try it in other drinks like coffee, tea, or cocoa. When you are going for the sweet and savory with nutmeg, remember that a little goes a long way. Be subtle with your use of nutmeg when seasoning your meats.

Ginger is an Asian spice. It is so versatile and really well known. It’s obviously one of the main ingredients in gingerbread. Ginger is great for settling upset stomachs too, so it’s a great spice to keep around. Make a ginger tea the next time your stomach is upset. Just steep it in hot water. You can use ginger in desserts, to season roasted vegetables and meats, and for seafood and stir fries. It’s the perfect complement in soups like carrot or sweet potato soups.

Who doesn’t love a good cinnamon stick? This has got to be the one winter spice that everyone truly associates with winter. With its sweet and woody taste it is the perfect addition to not only desserts, but also many hot winter drinks.

Just do not eat cinnamon by the spoonful. Not only does it taste bad, it really does a number on your lungs. It can be great for keeping healthy in the winter, though; if you add it to your tea with a little lemon juice and honey, it helps with cold and flu season. Use cinnamon in spice blends for things like curry or a jerk seasoning. But even just bringing the smell of cinnamon in your home with cinnamon sticks has a warming, cozy feeling. So enjoy that cinnamon.

Known as the “Queen of Spices,” this spice comes from India. It’s smoky in flavor. Cardamom mixes well with citrus flavors. It’s great in sweet and savory dishes like curries and rice. Ground cardamom can be used in soups, pates, stews, and purees. Add a few seeds of cardamom to rice pudding, ice cream, custard, or sprinkled over fresh fruit. Cardamom can also be used to treat indigestion or other stomach problems and it’s a natural diuretic.

These are dry flower buds of a tree native to Indonesia. Clovers are great in roasted meats (think ham), baked beans, split pea or bean soup, desserts like apple pie, stewed and baked fruits, and pickles. Add cloves to broccoli or cabbage to aid in the digestion of these vegetables. Flavor soups and barbeque like sauces with cloves. Added to curries and other spicy dishes it will help with the heat.

Cloves make for a great home remedy for toothaches and other mouth or throat problems. A clove is also great for skin problems like acne or even styes on the eye. Wet the clove with some water and apply it directly to the eye. Cloves have a soothing, warming effect that really helps with home remedies.

This spice comes from the cilantro plant. The seeds of coriander have a flavor similar to lemon peel. This is one spice where you can never have too much. It’s perfect for tempering other spices that are too pungent or that you have over spiced with. It’s great at balancing things out.

Coriander works particularly well with cumin. This is great in Latin American cuisine like enchiladas or even in a pot of beans. It can also be found in many curry dishes. It’s perfect for spice rubs for chicken and fish. It also adds a nice flavor to homemade pickles. Toasting them lightly really brings out the flavor. Use them untoasted in sweet dishes.

This is a beautiful spice that has a strong licorice taste. Star anise is used in many Asian dishes – think Peking duck. Try it in fresh and pickled fruits, soups, stews, braising broths, curries, stir-fries, and with pork. It adds a sweet licorice pepper flavor to savory dishes. Use it sparingly, but making a braise for meat with it is great. Mix it with broth, onion, and soy sauce. These flavors work well with the star anise to naturally intensify the flavor of the meat.

The winter is about warm and hearty foods and these spices all work so well in soups and stews. That’s what makes them all great ingredients to add that extra flavor to your dishes. And many of them can even be used for health benefits. Since many people get sick in the wintertime, adding these spices might just help keep the sickness at bay. So experiment with all of these great winter spices and really embrace each and every one of them.