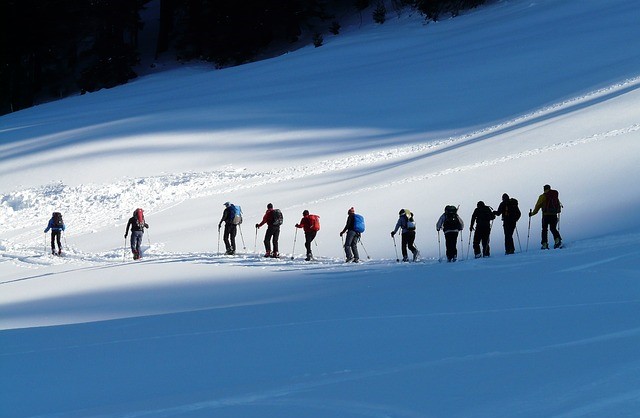 Cross country skiing is considered a hard and challenging sport and it is part of the winter sports Nordic skiing set of activities that also includes ski jumping.

Cross country skiing was not originally a sport. It traces it roots to earlier practices in Fennoscandian countries in the ancient Europe. In the 19th century, when skiing was starting to become a popular winter activity, cross country skiing also emerged as a popular, albeit harder alternative to downhill skiing.

Originally, the activity was a means of mobility for the transport of a person from one place to another using skis and ski poles to glide over the snow. In ancient times, people were really challenged by the immobility and the adverse effects of the snow on transportation. Thus, cross country skiing became widely used because it was much easier than walking through the snow.

The primary use of cross country skiing when it was devised in the Fennoscandian region was for hunting activities. Winter and snow prevented people from finding ample and sufficient food. Thus, through cross country skiing, the people were able to efficiently hunt for deer and other animals even in the deep snow.

Cross country skiing for hunting has become widely practiced by many in countries plagued by excessive snow. Nowadays, people in Norway and Finland, where there is snow most time of the year, are most familiar with cross country skiing.

The native Americans are also believed to have used cross country skiing for hunting purposes especially in those areas in the United States that was covered by snow throughout most of the year.

Other Uses of Cross Country Skiing

Cross country skiing has also been used as a useful skill by explorers during winter season. Those explorers make use of skiing as a means of getting to geographic locations characterized by slopes and down hills capped with inches and inches of snow that would otherwise be very difficult to access.

Army troops have also learned how to cross country ski. When is areas with suuficient snow, they carry ski poles and crossbows with them along with their guns and other equipment while cross country skiing. The skill is really hard and the practice is really challenging and, therefore, is excellent endurance training for troops.

The equipment used for cross country skiing was traditionally consisted of wooden skis and bamboo poles. Leather hand straps were used to tie the poles to one’s hands. The early cross country skier wore leather boots with very thick and firm soles that were tied to the skis with leather straps.

Equipment for cross country skiing has been enhanced by modern materials used in making skis, poles, and boots, and are widely marketed in countries where there is excessive snow in the wintertime. The prices of the new equipment can get very expensive, and that is why participating in this sport or recreational hobby of cross country skiing can be considered a significant investment.

Cross country sking is well worth the time, effort, and money that it takes as it provides a most satisfying physical activity for those who enjoy the cold and snow, and the quiet and beauty that is experienced while traversing the countryside.