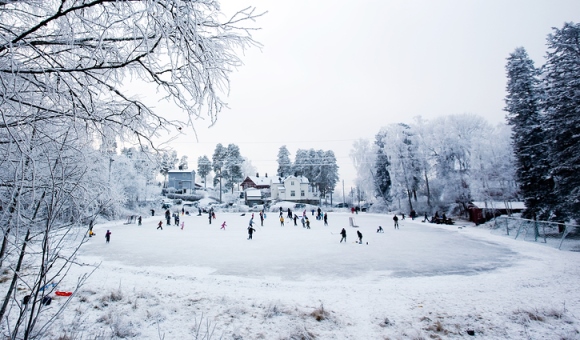 An ice skating rink can be defined as a frozen floor of ice, which might be frozen naturally or artificially. However it does not matter what a rink is made of as long as you love ice skating and want to have a ‘roll on the ice’.

Wonder of Nature or Creation of Human Design

However, for obvious reasons, there isn’t a natural ice skating rink everywhere in the world. Therefore, the application of human intelligence has provided substitutes for the naturally made bodies of frozen water.

For an ice skating rink in warmer areas that may not have the necessary freezing temperatures to make an ice skating rink, experts came up with ice cooling agents and chemicals which, when applied below or above the surface of the water, makes the water freeze forming a layer of ice floor, just like naturally made ponds that are used for ice skating.

Further inventions have now made possible  ice skating rinks made of synthetic materials or plastics, which give the otherwise hard floor the look and feel of a normal ice skating rink.

Nature’s largest made ice skating rink is in Ottawa (Canada) – The Redeau Canal ice skating rink. It’s a sheer pleasure to the eyes and forms one of the most beautiful artworks of nature.

Covering a length of about 8.5 kilometers, the longest ice skating rink is the annual River Trail rink. You can’t see the other end of the rink from the other side.

The ‘Guidant John Rose Minnesota Oval Rink’ is a work of human design, and is one of the most famous, but artificially made ice skating rinks, known for its sheer size and beauty. Located at Roseville, Minnesota in the United States, this ice skating rink is a major tourist attraction and people from all over the world go there to ice skate.

How Ice Skating Came to Be

The concept of ice skating started about 3000 hundred years ago in Finland and it caught the fascination of the Dutch, followed by the British and so on.

No wonder that with three-fourths of the earth being water, and seventy percent of that being ice, the formation of ice skating rinks would soon catch the fancy of the human mind to be used for some ‘purpose’.

The Rinks You should Visit

London comes first with its most famous ice skating rink – known as the ‘Hyde park’, followed by the Natural History museum.

The Rockefeller Center rink in New York is the USA’s most famous Christmas ice skating rink. It is very crowded during the Christmas season and is considered one of the most popular ice skating rinks in the United States.